The findings of a new survey of social workers by Community Care Magazine, supported by the Care and Support Alliance, provide shocking evidence of just how threadbare the social care safety net in England has become. 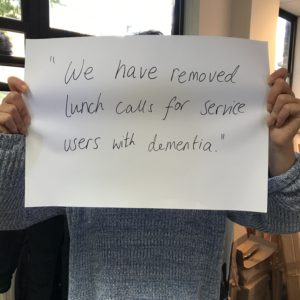 The survey(1) gives a unique insight into how many social workers feel about the frustrations of their day to day work as they ‘tell it how it is’.

There were 469 responses from social workers to the online survey, from every region of England, and their comments reveal the incredibly difficult position they are often in as they strive to support people in desperate need without enough cash in the system. For example:

“[There is] strong pressure from my line manager and commissioners to reduce costs as a main priority.”

“Colleagues constantly battle to keep packages at an adequate level to support clients/assist to keep them safe.”

“Care packages are not getting agreed by the funding panel. I am having to submit reduced care packages to the panel in the hope that some support will get funded, as opposed to none.”

“I cannot get new packages of care agreed or increases agreed when needs have increased.” 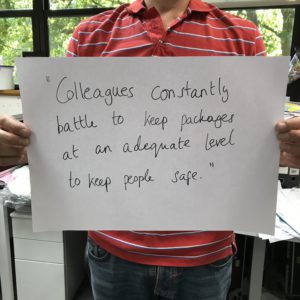 These comments need to be seen against a context in which nearly 7 in 10 68%(1) respondents to the survey said they felt expected to reduce care packages because of cost pressures in their local authority; more than 1 in 3 (37%) said they believed they couldn’t get people the care they needed; and, chillingly, more than 1 in 4 (28%) were not confident that the reduced care packages they had to administer were ‘fair and safe’.  In addition, 4 in 5 respondents (81%) said family and friends are being expected to provide more support to ‘fill in’ where care has been reduced.

In the survey the reason given most often by social workers for having reduced a person’s care package was because their needs had changed. However, far more worryingly this was followed by budget pressures and because local authority support is now more restricted. The examples some respondents gave describing the plight of older people and disabled and mentally ill adults whose social care and support is being restricted or removed because of lack of resources were profoundly concerning:

“I worked with a woman who could strip wash but who couldn’t reach her back and intimate parts of her body so had paid carers for years as part of her personal budget to help her…however it was cut as she was physically able enough to strip wash. This was devastating for her.”

“A person with hoarding issues and a tendency to eat rotten food had their shopping and housework call cut, resulting in an admission to hospital with food poisoning.”

“After one service user was told her care package was being reduced she seriously self-harmed and had to be detained in hospital.”

“I had to reduce the care package for three brothers who live together. Each has either a mental health problem, physical or learning disability. They had a substantial care package for 15 years. It kept them safe from financial abuse and enabled them to live in the community. After reducing the care package two of them went into residential care and died. The other was admitted to hospital with dehydration and hypothermia.” 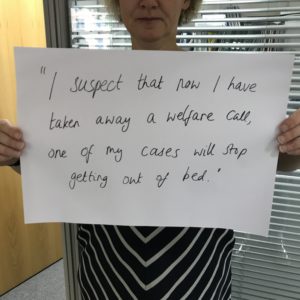 “In my local authority I work for managers who will not approve time for a care worker to visit an older person and prepare a hot meal. I am told to record telling the individual about hot meal deliveries as a reasonable way to meet this need. Meals on wheels are self-funded within the authority and can cost a minimum of £42 per week. Lots of my service users worry about spending money and so go without a hot meal.”

“The person requires support with walking to the bathroom but due to the cost he is now required to contribute towards it so he has decided he would rather have the risk of falling than an evening call.”

“There has been pressure on an elderly husband due to a reduction in assistance to his wife, causing the breakdown of the relationship. He ended up in hospital and she was placed in residential care.”

“[We have] removed lunch calls for service users with dementia.”

The survey also found that support to get out and take part in social and leisure activities was the type of help which was most commonly being reduced (72%), followed by help with domestic tasks such as food shopping and cleaning (67%).

In addition, more than 4 in 5 respondents (83%) did not think there was enough variety and quality of social care provision in their area for people to exercise genuine choice and control over the care they received.

Caroline Abrahams, Charity Director at Age UK and co-Chair of the Care and Support Alliance said:

“This is the first time that England’s social workers have spoken out in such numbers, blowing the whistle on just what a drastic state of decline social care is now in.”

“The social workers’ descriptions of what the cuts mean in practice for disabled people, those with mental health problems and older people make for tough reading and it is impossible not to be angered and saddened by them.”

“It is though important to remember that while social care is a service administered by local authorities, ‘the buck stops with Ministers’ and the suffering that vulnerable people are experiencing today is the direct result of the decisions successive governments have made to underfund social care. The extra £2 billion this Government has pledged will certainly help but the funding gap is far larger, so the situation is certain to worsen without further action.”

Mark Lever, Chief Executive of the National Autistic Society and co-Chair of the Care and Support Alliance said:

“Social care became an important topic during the recent General Election campaign and in the Queen’s Speech, when the Government committed to consulting on proposals to place social care on a sustainable financial footing for the future. Since then, however, it has all gone ominously quiet.

“This survey of social workers demonstrates why it is so crucial that this Government tackles the social care crisis as an urgent priority. Some of the suffering described is sickening and I think decent people in this country will be appalled at how little support is now available for people in need. People should be rightly anxious about what this might mean for themselves and their loved ones if they should they need help.”

Social care budgets have been cut by more than £6bn in real terms over the past seven years(2). As a result, half a million fewer older and disabled people receive care now than did five years ago(3), and research has estimated that more than one million people are not getting the care they need(4).

“As a locum member of staff – I’ve seen social workers again and again and again being expected to make cuts and if you don’t your contract’s cut. It’s brutal. Obviously, we’re not told to make cuts – but we are! It seems to me to be that those who are well informed about their rights are able to get the care they need but if they’re old or unwell and need someone to advocate for them – they go without.” 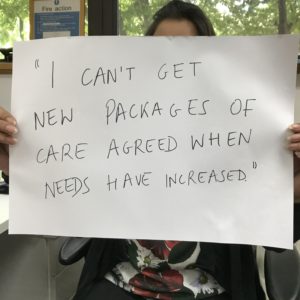 Social care user Rachel Looby, 30, from Harrogate, needed medical help after the amount of social care she received was cut. She said:

“When my hours were cut it was a stressful time for me. I took the wrong medication and ended up in hospital, and this made me feel like my health had not been considered at all. Being in hospital left me feeling anxious and upset and I worried if something else might happen once I got home.”

“This telling and poignant report lays bare the invidious decisions that are having to be made by social workers and managers every day. Working within finite budgets is challenging and staff have to consider how best to meet assessed needs within those financial parameters.

“We welcomed the additional £1 billion in extra funding this year, but we need a sustainable funding solution for social care.

“Adult social care remains at a tipping point and this survey is further evidence of why the issue needs to be treated as a national priority. We look forward to contributing to debates about finding a long-term sustainable solution to adult social care funding and delivery.”

Notes on the survey

Are you a part of our care system, be it as a care user, carer, social worker or family member? We’d love to hear your story. As an Alliance campaigning to get people the care they deserve we want your stories about the state of the system. Please tell us about your experience, or if you want to know more get in touch. We would always contact you by email before we share your story and you have the choice to remain anonymous if you would like.